Dinner By Heston Blumenthal – Isn’t It Time You Came To...

The best children’s shoes for autumn – in pictures 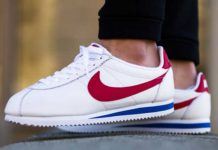 Sportswear – Staying On Trend When On The Track