Is The Breitling Navitimer The Ultimate Alpha Male Watch? Male Modelling – The Rise Of The Skinny Models 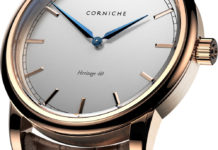