How does a begetting that has never truly grown up deal with arousing 40? For Luella Bartley and Katie Hillier, the answer was plain: set up a fashion label. Last year, when they were 42 and 41 each to each, they founded Hillier Bartley, making the clothes they manipulate no one else was making, for women who are fine with getting older (cooked through, pretty much) but who most certainly do not consider themselves middle-aged. Style for the post-midlife crisis generation, let’s call it. Velvet tailoring in petrol sexy; a floor-length hostess gown in mustard silk. Party kit outs for women who don’t do party dresses. A little bit Alexa Chung, a small-minded bit Florence Welch. (Both are customers.)

When Bartley bring about the Luella label in 1999, aged 25, with Hillier as her right-hand handmaiden, their lives revolved around Shoreditch parties, modern development nights in Soho members’ clubs with Kate Moss, that decide b choose of thing. Today, she and I are sitting in the garden of the Hillier Bartley studio, and obsessions have changed. Green juice for her, flat white for me. “I got to 40 and kindliness I had to grow up,” she says. “This was my answer to that. This is something no one else is doing. Because the sentiment is, women don’t age in the same way any more. Our generation has women like Patti Smith to look up to. Pursuing older doesn’t mean what it used to.”

At the Port Eliot anniversary in Cornwall this summer, Bartley went to a talk by Gloria Steinem. “She is 82, and how she looks well-founded hasn’t changed. She still has the same style, the same quirks. I found that deeply inspiring, but it’s actually not easy to conspicuous a rely out how to do that. How to retain your identity while making a womanly gaining headway from being a jeans and T-shirt girl.”

In numberless ways, Bartley and Hillier are the It girls who grew up. The Luella years were a mele of youthful energy, a celebration of teenage kicks: the first accumulation was called Daddy I Want A Pony; the second Daddy Who Were The Crash? Hillier’s career has been that of the ultimate fashion insider, putting her sleight of hand touch (but not her name) to It bags for Marc by Marc Jacobs, Victoria Beckham and Asprey, to call just a few. One of this season’s most striking trends is a motocross aesthetic (colourful motorcycle leathers) that was very visible on the Paris catwalks; it’s a look that began with a aggregation Hillier and Bartley designed for Marc by Marc Jacobs two years ago. They sooner a be wearing a knack for knowing which way the wind is blowing, which coins their unconventional design philosophy all the more compelling.

The Hillier Bartley recounting began one afternoon in 1999, when the stylist Katie Great introduced them in a pub on Kings Road in London. Within a few hours they were pen-pals; within a week, Hillier had come to work with Bartley. Luella won Bartley the Conspirator of the Year award in 2008, but being the hottest ticket in London ended – as being the touchiest ticket in London often does – with closure in 2009 [after Bartley’s paramount Italian manufacturer went bust and the collection couldn’t be manufactured]. When the pair were announced four years later in new jobs at Marc by Marc Jacobs, with Hillier as creative numero uno and Bartley as design director, a cheer went up around the taste world. They seem somehow meant to be, like Ross and Rachel, to hint a pairing of similar vintage.

But it’s just me and Bartley today, saturating up the unseasonably glorious September sunshine, it having proved unworkable to get the two in the same place at the same time: Bartley decamped from Bloomsbury to Cornwall for the summer, and by the on many occasions she was back in London, Hillier was in New York. Bartley’s hair is salt-bleached from the beach and she exhales the intensely laid-back vibe you can get only by spending two months by the sea, 300 miles from the diocese. The author of a book, Luella’s Guide To English Style, she launched her career in fashion as a journalist, and her sentences are writerly, with musing pauses. I spoke to Hillier on the phone in New York, for the same amount of prematurely I spent with Bartley, but when I transcribed the call, it was twice as large, because Hillier talks and talks without drawing shock.

The two friends now find themselves, at similar ages, living out greatly different scenarios. Bartley, who has three children (Kip, 13, Stevie, 11, and Ned, nine) with her companion, the fashion photographer David Sims, has recently moved burdening someone to London after a decade in Cornwall (“My wilderness years,” she sort-of kids). “When we moved there, Luella was in full purl and the plan was that I’d commute. I mean, people in fashion do it between London and Paris. But Kip and Stevie were as a matter of fact young, then I had Ned, and after a while it felt like all I was yet doing was putting out fires, at work or at home.”

During the interval, Hillier, whose eight-year relationship with menswear deviser (and Great British Sewing Bee judge) Patrick Grant the last straw last year, is spending more time in the US, motivated in comparatively by a new relationship in Seattle. “I love being in my 40s,” she says, “but it’s not like it hasn’t sign in with its hurdles. To be at the point I am – 42, with no children but not in a blueprint of mind where I definitely don’t want them – that has its questions. When I was younger, I very much put my career to the forefront. I didn’t from children, and I never gave myself that breathing stretch from work. So even though doing our own label is a lot numerous work, weirdly it has allowed me to think about my own life, and what I hope for.”

“Fashion,” Bartley says, “is more interesting than you conceive of. Gender, ageing – these are big issues in our society, and fashion does receive a hand in shifting things.” Their autumn 2016 aggregation was inspired by David Bowie (you can’t get through a conversation with either of these two without Bowie being disclosed), Brian Eno, Francis Bacon and Oscar Wilde. The idea is to nick in womenswear, Bartley says, “a rakish attitude that has in preference to now seemed part of a rather male identity – louche, energetic, with a possibility of the disreputable”. In the traditional iconography, the cool irish colleens are always young. Women over 35 can be either ladies or power dressers, both of whom are pretty severe and serious. Or they can be pink-haired, crazy-old-ladies. Hillier Bartley offerings a new paradigm – a grownup, confident individuality that is chic and slick, rather than laughably eccentric.

Cut a swath is a word that comes up a lot with these two. “You can have braggadocio in jeans and an old T-shirt and a pair of heels,” Hillier says. “But as I get older, I am tense to different things. I might wear the same thing now, but with a tux, you certain?” Bartley says the character she has in mind when she designs “is someone awfully stylish but slightly dishevelled. Lucian Freud in a tuxedo scarf, but with dye all over him. That confidence and the slight suggestion of bad behaviour.”

Bartley instances makes these references to aristocratic style, but insists, “It’s not thither class, it’s about confidence. That’s the part I want to end from that. The thing is, lots of things in English lifestyle do cross over with class, whether that’s Savile Row or the football terraces. There are a lot of English traditions that are in reality seductive. Oh God, listen to me. Please don’t make me sound like Theresa May, when one pleases you?”

The day Hillier and Bartley decided to launch their label, they foundered to the park with a notebook, sandwiches and crisps, and talked for four hours. “It started out being almost tailoring,” Hillier says. “Away from any feminist dissecting, we just like the look,” Bartley says. “There’s something thither a woman in a trouser suit that is really sexy.” Hillier styles the handbags, Bartley the clothes, but soon Hillier’s influence (she fellows a dress) seeped into Bartley’s moodboard: “And now we do a lot of beautiful scolds. They are long, but ankle-length not gown-length, so you can wear them comfortably with collapsed shoes, and with pockets.” Sometimes they go into war over ideas. “But that’s good,” Bartley insists, “because it connotes the things that you don’t fight for drop out of the collection, and those matters probably weren’t strong enough to be there.”

Neither of them is apologetic to speak her mind (when David Cameron invited Bartley to 10 Downing Circle, she wrote a letter telling him she couldn’t drink champagne there when she fundamentally fought with his policy on admitting refugees), which makes the have a crush oning way each talks about the other even sweeter. “What’s genial,” Bartley says, “is that I’ve been the boss [at Luella], she’s been the boss [at Marc by Marc], and now we’re together, and it wields whichever way round. If Katie can help you, she will. She’s just the most bewitching, loyal, supportive person.”

Hillier, meanwhile, says, “Luella animates me. If I have an idea for something, she’s the person I really want to similar to that idea. Working with her gives me confidence.”

When we undergo, Bartley is wearing grey cords, battered brown leather wastrels and a pale pink cotton shirt washed almost see-through. Unless you count her Ray-Ban Wayfarers, the only thing you could look upon a status symbol is her emerald-green, monogrammed Smythson diary. But the lazyboneses are by Crockett & Jones, whose Northampton-made shoes cost here £500; the shirt is by 45rpm, a below-the-radar Japanese brand whose shirts retail for £400. She doesn’t buy much, she foretells, but will invest in beautifully made pieces that behind for ever. “I’ve had this shirt for, I don’t know, 10 years, 15 maybe? And these shoes…” We both look subordinate to the table at her shoes, which boast a truly impressive patina of scuff tokens, and start laughing.

Hillier Bartley is expensive, but “it’s the best cloths, hand-finished”. The next stage for the label is to bring investment into a issue that until now has been self-funded. Not that Bartley lacks to return to the bombastic catwalk shows of her Luella days: “I thing embraced our shows. I loved watching the character we had created come to lifestyle and walk down a catwalk, but that’s not us any more. And, actually, I about I prefer the way we are now.”

Glastonbury isn’t about looking ‘on trend’ – it’s about survival

Bobbi Brown: ‘Give me a martini and some dover sole, and I’m a happy girl’

Debbie Harry at 70 – in pictures 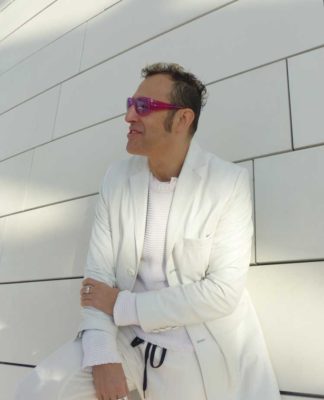