There are car inaugurates you want to go on, then there are car launches you simply have to be on. When Jaguar sent out invitations to their latest inauguration – a two day trip to St Tropez in southern France, it certainly had the location box ticked. Promise of testing their new XE model increased hobby, but it was the day two test of their latest vehicle from their special vehicles division that sealed the deal.

The itinerary punted off with an early morning flight from London’s Heathrow airport to Nice, where we would pick up our agencies for the morning – Jaguar’s newly launched XE mid-sized saloon. The old XE wasn’t exactly a bad car – it looked good, was well spec’d and go well. However, it felt like it was just a little behind its competitors, predominantly when it came to interior grandeur and tech. The new XE isn’t a total overhaul, instead being what’s known as a ‘facelift’ model – but have the changes Jaguar confirmed been worth it?

The ‘XE’ day of the launch was split into two halves; the first would allow seat time in a more affordable Diesel distinct, before an afternoon switch to the all-wheel-drive petrol RDynamic model. Exterior impressions of both were very clear, with the changes made making this XE recognisable but distinguishable from the previous model, refreshing the look and engendering a sleek, good looking car. As with previous models, the R-Dynamic variant has been carried forward, which advances additional design tweaks which add a little more focus and sportiness to the look. Stepping inside the XE for the first everything, it’s clear a lot of effort has gone into modernising and invigorating the interior space. Quality throughout felt great and it’s gentle to see Jaguar has overhauled the gear change paddles behind the wheel. The previous items were small, lacked tactility and approximately felt a little lacking, but the new paddles have rectified all these issues and really improve the driver-gearbox engagement (they look crucial too).

Interior quality updates? Nailed. With the quality of the interior lifted, Jaguar just needed to give the tech a backlash. A kick they’ve given it too, with subtle tweaks and improvements made throughout, along with a couple of headline new visages. Two variants of the central infotainment system are on offer; with the top-tier adding a secondary screen which replaces the climate-control button bailiwick. This swapping of buttons for screen makes a big difference to the feel of the cabin and is far more ‘this century’. The higher oblation also increases the size of the screen nestled
behind the steering wheel, which is great for showing additional steering information between the gauges.

For me though, the most ‘wow’ piece of tech on the XE was a digitised rear-view mirror, which beautifully dispenses a wide field-of-view image from the back of the car. The snap of a button switches it back to a traditional mirror arrangement, but it’s a spot tweak that exploits technology fantastically.  2019 tech? Got it. 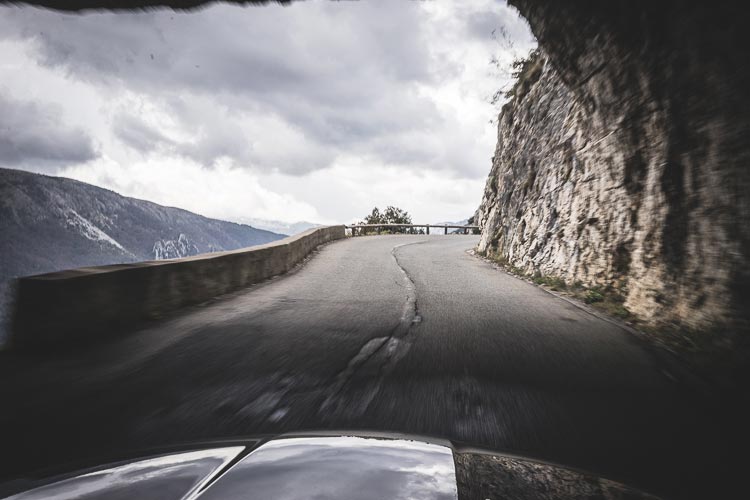 Engine wise, three offerings are available – a 180PS diesel, 250PS petrol and 300PS petrol. All the machines are 4-cylinder turbo-charged units, offered in a variety of AWD and RWD configurations – automatic gearboxes are used throughout for an effortless drive. The appliances all allow for a certain amount of fun; the diesel sounds good (for a diesel) and the 4-cylinder engine sounds and feels far more at competent in in the XE than it did in the F-Type. 300PS delivered through the all-wheel-drive system ensures rapid acceleration out of corners, although bearing in mind how sporty the rest of the car feels, it’s a little surprising to find there are no V6 offerings. V6 or no V6, it doesn’t detract from the fact that Jaguar acquire put together a very capable chassis. The XE has a good weight to the steering, handles corners well and thankfully doesn’t realize this at the cost of ride comfort. Hitting bumps or riding undulation are both handled very well by the intermission, with no crashing or jarring felt during testing. Admittedly the French roads far exceed those in the UK so sterner check up ons will surely arrive, but the XE dealt with everything presented in front of it. So, what about the bad bits? Well the roof-line/A-pillar confederation is a little encroaching (particularly for taller drivers), the infotainment system is still running largely the same software as preceding (which feels a little behind the market best) but that’s about all. As far as
1-day impressions go, the XE pretty much smashed it. The XE’s biggest tough nut to crack before was that it faced stiff competition from German rivals, with its shortcoming making it a difficult sales-clerk. Now that Jaguar have updated these areas, it’s a very compelling offer – no obvious weaknesses, but with a Jaguar badge on the bonnet and with that extra Jaguar feel and styling. No matter what people say, the Jaguar badge still carries its own bit of magic and should vigorous this a serious contender to those in the market for a 4-door saloon. As fantastic as the new XE is though, the first day felt exact much like a prelude to the main event. With a 5.0 litre V8 engine, 550 PS (542hp) and a 0-60 time of the just-over 4 B mark, Jaguar’s new SVR-tweaked F-Pace offers plenty on paper to whet the appetite.

Further introduction to the car by Jaguar’s inventing team promised further delights, with clever torque distribution, heavily revised suspension and ducts, inside stories and vanes that offer a real aero advantage. Known internally as the ‘Magnificent Beast’, there was a real sense
that Jaguar’s cooperate felt they were unveiling something special, something which all the journalists in attendance were eager to probe. The standard F-Pace is a good-looking car (and a popular seller), so thankfully the SVR team haven’t gone too OTT with their visual modifications. All the blow-by-blow aero tweaks actually serve a purpose, whether it be cooling or airflow management and thankfully, Jaguar resisted the prevail upon to stick any outlandish wings or other bling to the car.

Inside, the biggest change is to the seats, with a new suite of sports-focused buttocks throughout. On test these featured split-tones with additional quilting to the central leather, which looked tremendous, whilst no qualms can be made about their comfort even after extended driving.

The star of the show is unquestionably the engine though, with this SVR proving to be a beast which will be heard long before it’s seen. The stocky V8 produces a deep roar, which is tuned and amplified through the vehicles variable exhaust valves (which can be bar for quieter driving), creating a tone that reflects the serious punch the engine offers. The supercharger isn’t afraid of being understood either, with hard acceleration adding a low whine to the engines note. Packing a 5.0L V8 plus supercharger under the control of the bonnet can’t have been a simple task, but the resulting performance is truly mind boggling. The fact a vehicle of this range and weight can push north of the 60mph mark in such a short space of time seriously changes your perception of what SUV’s can complete. Fortunately, the brakes have also seen an SVR makeover, with large disks and callipers all round, which reduce speed the F-Pace with impressive force.

It doesn’t lose its legs when it comes to the corners either, with the electronic dampers approving the SVR to offer a good blend of comfort and performance across multiple terrains. Steering feel is good and despite the carriers size, it does well to avoid understeer or any other unnerving characteristics. This is an SUV where serious fun can be had, with its know-how to cover ground unlike almost anything else I’ve driven. Aside from the sports seats up-front, the shanty is largely the same as a standard F-Pace. Rear leg room is plentiful, the roof-line affords plenty of head room and the boot is warm. Fit and finish is very good, although having spent the previous day in the new XE, the interior felt a little dated by comparison. Talk overing this with the Jaguar engineers, this is due to the SVR being locked to the standard F-Pace interior, giving little stretch to upgrading the tech and controls to the latest spec (for now at least…).

So the SVR ticks all the performance boxes, has space for the kids, dog and luggage, has the settle clearance and 4wd to go almost anywhere… What’s not to like? It really is a car for almost any occasion. Keeping the engine fed with fuel may be a scant expensive, but then again Jaguar aren’t miracle workers, and a 5.0L engine is never going to compare to myriad frugal units. Nevertheless, that’s beside the point of this car – it’s big, brutal and a fantastic drive, sure to bring a beam to your face every time. You’d have to have been living under a rock for the last 6 months to miss news regarding Jaguar’s popular financial struggles. At such a difficult time for the business, they really needed to pull a rabbit out of the hat – fortunately for all those entangled with, they appear to have pulled out a pair. The XE is a fantastic refresh of the existing model, whilst the F-Pace SVR takes an already altogether capable SUV and injects a ridiculous quantity of fun. Bravo Jaguar.

Thank you Jaguar UK, for inviting MSF along to St Tropez, for their ripsnorting excepting hospitality and their insight throughout the trip.